Here is a new photoshoot of Zoe taken this year by the photograph Matt Jones for i-D Magazine. I have added six high-quality outtakes in the gallery. Check them out ! 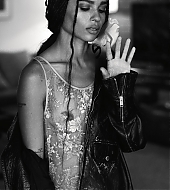 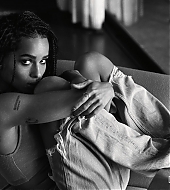 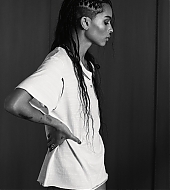 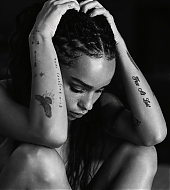 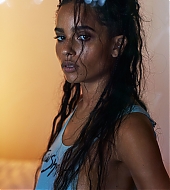 Yesterday, Zoe was seen talking with a friend in West Hollywood. She looked gorgeous with her white sleeveless blouse and black pants. I have added 9 high-quality photos in the gallery: 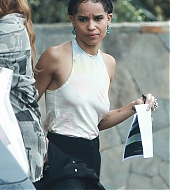 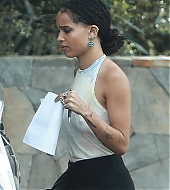 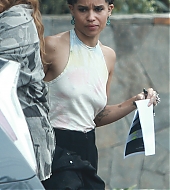 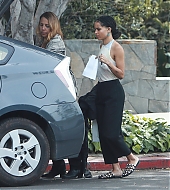 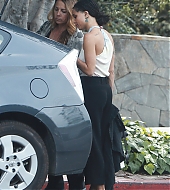 She might have an enviable perch in the entertainment ecosystem with recent film credits as diverse as “Dope,” “Mad Max: Fury Road” and “The Divergent Series,” not to mention her famous lineage, but she’s also seen her share of darkness in Hollywood, too, from discrimination to stereotyping.

“People have tried to do that to me over and over again and I’ve been fighting it and fighting it,” Kravitz said. “I would get auditions and it would be like ‘they want you to play the best friend.’ And it’s like ‘why can’t I audition for the lead?’ Then it’ll be like ‘OK now you’re the quirky black girl,’ or ‘now you’re a hippie.’

“I can play all kinds of people. I don’t have to play myself.”

She’s made up her mind to take a stand, not only in the kinds of roles she chooses, but also in how she’s going to create change for herself.

Take “Allegiant,” the latest entry in “The Divergent Series,” in which Kravitz reprises her role as the loyal, fierce Christina. Sure, she’s the best friend to Shailene Woodley’s Tris, but she’s one of many significant female characters in the film, which also boasts admirable racial diversity.

In the Oscar-nominated “Mad Max: Fury Road,” too, Kravitz plays one of the wives of Immortan Joe who is escaping captivity in the high-octane race across the wasteland. END_OF_DOCUMENT_TOKEN_TO_BE_REPLACED

On March 21st, Zoe was seen arriving at Reese Witherspoon’s 40th Birthday Party with her boyfriend Twin Shadow in Los Angeles. I have four high-quality pictures in the gallery: 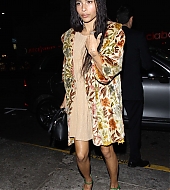 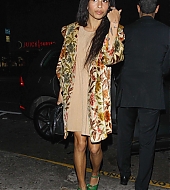 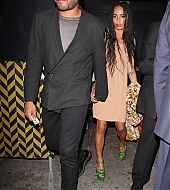 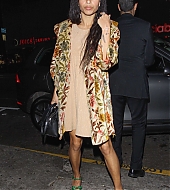 The first half of Tribeca’s feature film slate was announced last week; now we’ve got the second part. Regular contributor Noah Buschel is in there with his new film The Phenom, although the big marquee title is probably the spectacle of Michael Shannon as Elvis Presley.

Vincent N Roxxy, directed and written by Gary Michael Schultz. (USA) – World Premiere, Narrative. Vincent (Emile Hirsch) is a small town loner, and Roxxy (Zoë Kravitz) a rebellious punk rocker. When they find themselves on the run from the same dangerous criminals, their feelings for one another deepen, despite their dangerous circumstances. Soon, the star-crossed lovers discover violence is never far behind them, in Gary Michael Schultz’s alternately romantic and brutal drama. With Emory Cohen, Zoey Deutch, Jason Mitchell, Scott Mescudi. 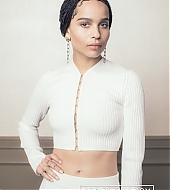 LOS ANGELES — Zoe Kravitz is doing her best to get out of the shadow of her famous parents — rocker Lenny Kravitz and Cosby Show actress Lisa Bonet.

Co-starring in the popular young adult sci-fi Divergent movies helps the cause.

Kravitz returns to play Christina in The Divergent Series: Allegiant, the third movie in the franchise, with one left to go (Ascendant starts filming later this summer).

In the latest dystopian trip, Tris (Shailene Woodley) leads her Allegiant crew over the wall surrounding a post-apocalyptic Chicago to discover what lies beyond.

Despite the boost Divergent has given her career, Kravitz isn’t all about the series.

She received positive reviews for her role of Nakia in the modest movie satire Dope.

“My first mother,” she says of her part in the dark comedy.

The busy model and actress even finds time for her pop trio, Lolawolf, which is still going strong since forming three years ago. END_OF_DOCUMENT_TOKEN_TO_BE_REPLACED

Yesterday, Zoe was seen strolling out in New York City, New York. I have added seven high-quality photos in the gallery. Check them out ! 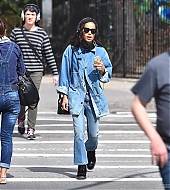 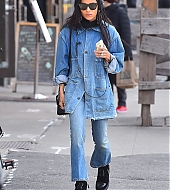 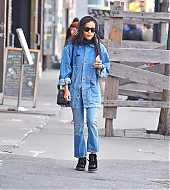 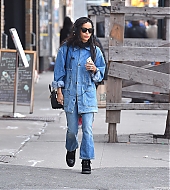 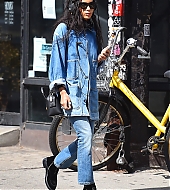 On March 17, Zoe sat down with Kelly and Michael for the Live! With Kelly and Michael show. She looks hot in her Coach outfit and her Saint Laurent shoes. Zoe is currently busy promoting her new film Allegiant, which is the third film in the Divergent series. During the interview, Zoe revealed that she and Miles Teller wanted their characters to hook up in the movie : “First of all, he’s adorable,” Zoe said when asked why. “Also, our characters…me and Miles have this love-hate relationship in real life and also in the film. So we thought, give us something to work with. The tension is so palpable.”