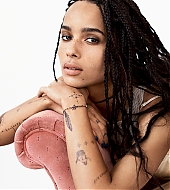 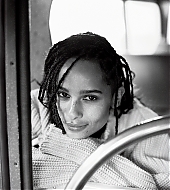 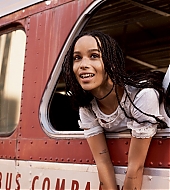 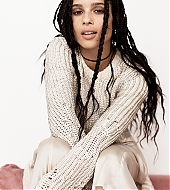 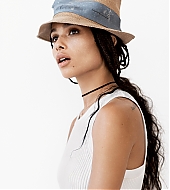 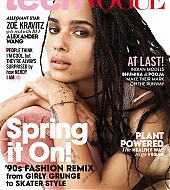 On a brisk Monday evening after wrapping her Teen Vogue cover shoot, Zoë Kravitz sits down for dinner with BFF Alexander Wang at Locanda Verde, in the quiet Manhattan neighborhood of TriBeCa. She wears a distressed, striped Freddy Krueger-esque sweater by the designer and looks surprisingly fresh-faced for someone coming off a 10-hour day. It helps that she’s excited about an upcoming trip to Japan with her boyfriend, George Lewis Jr. (aka Twin Shadow), to celebrate her 27th birthday. It’s a real vacation for the star, who has been juggling roles in major films like Mad Max: Fury Road, Dope, and the Divergent series (the third installment, Allegiant, comes out on March 18) while recording and touring with her electro R&B band, Lolawolf, and recently being crowned a new face of Calvin Klein (with mom Lisa Bonet) and Balenciaga. Over antipasti, the two arbiters of cool (who are both quick to laugh off that very title) discuss fame, fashion, and friendship.

ALEXANDER WANG: The thing that I always tell people when they ask me about you is that you are very down-to-earth. Despite who your parents are [Lenny Kravitz and Lisa Bonet], you were raised in a way where you had to work for everything yourself. Nothing was just given to you, you’re very driven, and you don’t take things for granted.

ZOË KRAVITZ: My parents didn’t become who they are because anything was handed to them, and they didn’t raise a child who expected something to be handed to her, either. My mom would have killed me if I’d assumed any kind of privilege. At first I was really adamant about making sure people knew that I was working hard. Things were definitely handed to me a little bit easier, but people were also judging me twice as hard.

AW: Is it frustrating to always be compared to your parents?

ZK: I used to get either bitchy or uncomfortable. That came from the insecurity of thinking people were talking to me only because of who my parents are. I’m in a better place now where I’m confident in my work. And I want to be able to talk about them with love. They’re cool people — I get it.

AW: I would be proud to be their son.

ZK: They love you!

AW: You have a true sense of self and style. I’ve always connected with the fact that you treat all clothes with the same value, even if it’s a treasured vintage T-shirt.

ZK: You can tell when someone is driven by labels. If something is couture they think it’s important and wear it and sometimes make a terrible fashion mistake. People are shocked that I know so little about designers. I know the big ones because my grandmother wore them or they’ve been around forever. I know you because you’re my best friend, but I don’t know much about the fashion world except for when I like something, I like it.

AW: One time I saw that picture of you and said, “Oh, my God, Zoë, who made that bag?” And you said, “Oh, that was a brown paper bag that I rolled up from lunch and threw my wallet in.” It was great. And once I asked, “Zoë, what are those shoes?” And you said, “Oh, I cut them because they didn’t fit.”

ZK: I had these vintage heels on that were too small for me so I had slit the front of them. Dude, you’ve never stopped making fun of me for that, ever.

AW: No, that’s what I love about you. You have this ease and nonchalance about approaching things, and I think that’s so— I hate to use this word, but — cool. It’s just so cool.

ZK: Whatever that means. Everyone is looking at everyone else to see what’s cool. So it’s just all about a level of confidence. When anyone sets out to be cool it becomes contrived. Cool just means “I agree with this in this moment. People thought acid-washed was cool, and it wasn’t cool — it was cool then. So it really is a moment of acceptance. It’s superficial that people think I’m cool because I wear certain clothes and I have tattoos. The funniest part is, when they get to know me, they’re always surprised by how nerdy I am.

AW: When was the first time you realized that you wanted to go into the family business?

ZK: My mom and grandmother were actresses, and I knew I was going to do this since I was super young. I would put on shows at my grandparents’ house and sing “Somewhere Over the Rainbow” in the living room. I was in drama club and chorus, and I knew every word to Grease.

ZK: And you’ve helped me grow up in a lot of ways — especially in the fashion world. When I met you, I wasn’t working that much. As I got older, my career was picking up, and I had to figure out how to present myself. I was a weird person and was wearing my DIY shoes. You appreciated my uniqueness when I don’t think a lot of people did, but you loved me enough to gently nudge me. I needed someone to say, “You’re a woman now. Dress like a woman.” I don’t like tight clothes and wasn’t comfortable in my body. I was in this awkward phase, and you really helped and pushed me when I needed it.

AW: If I can get you in a pair of heels, then I’m halfway there.

ZK: You’re like, “Take off your Adidas sports sandals. Please, God. Brush your hair.” People know that we’re friends, and that I wear your clothes all the time, but above and beyond that you have honestly guided me through my career.

AW: Speaking of, what’s next for Zoë Kravitz?

ZK: I want to write and produce and direct and star in my own films. I have so many half-written scripts, ideas that I think are really great. I just don’t have the time to get them off the ground. It makes me upset, because we live in a day and age where you can really develop your own projects now.

AW: There’s also so much attention on female directors and producers at the moment.

ZK: It’s great that it’s a subject that’s trendy right now, but we’re still waiting for this shift to happen from the men who run Hollywood. Why aren’t women starring in more films? It’s because the men are writing them and are the ones cutting the checks. We can’t blame them, I personally don’t think. We need to take that extra step.

AW: There also needs to be more diverse casting in Hollywood. The black girl and the gay man seem to always get cast as the quirky best friend.

ZK: Typically white people have the story, and any kind of minority is like adding that pop of red or fun purse or pair of shoes to jazz up an outfit. These people are accents that make things funny, weird, or dramatic.

AW: Unless it’s a black movie.

ZK: I spent so much of my career saying no to those films. I’ve seen that movie a million times, and I don’t feel right putting that into the world over and over and over again. I’m not going to spend the rest of my life playing some girl’s friend or some girl on crack in the projects.

AW: Do you have the same frustrations in the music industry?

ZK: To an extent, because I get compared to a lot of artists who I think I have nothing in common with, except for the fact that I’m brown and I don’t do hip-hop.

AW: How do you balance both the film and music worlds?

ZK: I have to work around the films. Whenever I have free time, it all goes to the music. It keeps me busy, and it keeps me creative. But it’s tiring, and it’s also not like I’m in some huge pop band where I’m, like, in a tour bus, on private jets. We’re in a van following someone around, loading our gear. It’s not this glamorous thing. Although sometimes we are sleeping in the van wearing Chanel.

AW: What are the top qualities you look for in a human?

ZK: Humor trumps everything and is probably number one. I think it trumps being politically correct. We live in such a PC world because of social media, which makes me sad. Loyalty is also very important to me. I’m an incredibly loyal person. And kindness. I think being kind is actually harder than people like to admit. It’s hard for me sometimes to be kind. I have to check myself all the time about how I treat myself and other people.

AW: You’re always being your most authentic self, as Oprah Winfrey would say — which is not always going to be perfect.

ZK: It’s definitely gotten me into trouble a few times.

AW: Me too. It’s harder in the beginning, but people respect you for it afterward, and then the payoff is much bigger.

ZK: I learned early on — I can go to a shoot and they will put anything they want to put on me and I’ll look like an idiot because I didn’t say I don’t like it. It’s OK to have an opinion.

AW: You can be grateful to be there. It doesn’t mean that you have to wear a purple…

ZK: Exactly. Today [at the Teen Vogue shoot] when they were like, “Wear this dress,” I was like, “I’m not wearing that dress. I’m so sorry — I can’t wear that dress. I’m not going to wear it.”

AW: Which is fine, because there are 30 others. OK, here’s the last question. Do you consider yourself a role model?

ZK: For a long time I didn’t want that label or that pressure. What shifted recently is when I see girls who know my work or come to my shows and see themselves in me. When I think of my version of a role model, it’s not about being the perfect Samaritan; it’s just being out there and being honest and happily imperfect.

AW: Carrying a brown paper bag as a purse.

ZK: I’m another human being, floating around out there in the universe and figuring it out, too. If seeing that brings you comfort, or gives you hope, or makes you feel anything— makes you feel not alone — if that is being a role model, then I’m happy to do that.

You can get Teen Vogue’s March issue on newsstands March 9.